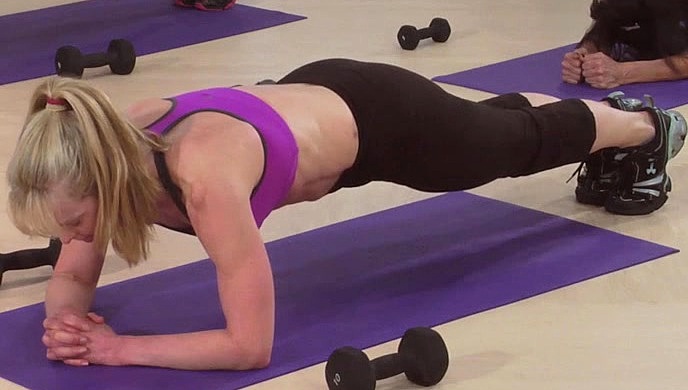 In Part 2 of our interview with Sharon Money Twombly, fitness video star & (former) Gigabody featured instructor, we delve into her personal fitness and diet routine. How does she maintain those unbelievable abs? She shares tips & tricks with us.

If you missed Part 1 of this interview, where we discuss the role of physical therapy in Sharon’s fitness instruction, check it out!

Part 2 – The Role of Fitness and Diet

Q: You are in incredible shape. What is your routine like in a typical week?

Right now I teach 5 days a week, which is a lot. In the summers I add a water class two days a week. But typically through the year I teach Saturday mornings and Monday and Wednesday nights. I teach Sports Conditioning Monday and Saturday, which is a pretty all out class. It has a lot of intensity intervals; it’s a drenching kind of class. Wednesday I teach a HIIT class. So Saturday, Monday, and Wednesdays are high, high levels for me. Sunday, I try to do something that is more weight-focused. If I’m doing heavier cardio Saturday in class then I’m doing more weights on Sunday.

Tuesday is always my light day, so Tuesday I’ll do a barre workout- or ideally that would be the yoga night, if I get there, that’s always the goal. Then Wednesday I go hard again because I teach HIIT. Thursday is another light day, for example, my low impact workout "Low Impact with Weights" – I do something like that. Still some cardio, still some weights, but not full out. And Fridays, I just take off because by Fridays I’m pretty much fried.

I try to balance it, one day cardio, one day weights. I love kickboxing, can’t say enough about that. So if I did HIIT the day before, the next day is great for kickboxing which has upper, lower body conditioning without tons of jumping-other than a few hitch kicks and whatnot. It’s a little more grounded and I need a workout like that.

Q: How much is diet a part of your routine? Obviously, you are incredibly active and you have great genes. But how much does diet factor in to your health?

Diet factors in a lot. I have a ton of seasonal allergies- if there’s a plant, or a tree, or grass, guaranteed I’m allergic to it. So I had a physician talk to me about sugar. Sugar is such a trigger for the inflammatory response, which makes allergies worse. In the last 3 months I’ve dropped my sugar intake, which I have to tell you is not fun and is hard to stick to. This week my youngest daughter made homemade ice cream that was unbelievable. I ate it every single night. But overall I do try to eat healthy. I don’t eat a lot of junk food. I eat gluten free, so that takes a lot of processed stuff out of the equation. And my husband, Greg, eats really healthy also. We try to do that within our household.

At this point, if I eat not so healthy, I don’t feel as well working out. I feel those extra 1 or 2 pounds if I’m jumping around. It’s just like they say: eating clean, garbage in equals garbage out, all those expressions, there’s validity to all of them.

Q: Do you ever hit plateaus? Is that something that you think about?

Yes absolutely. When we filmed "Adrenaline Rush", that workout, I felt like I was not in great shape. I mean, it was fine, but..

When you’re doing weight training, you’re causing tears in the muscle and your body knits those back together. That adds to your metabolism.

Me: That was a tough workout!

Sharon: Yes it is very tough. I actually still do that one and I’m dying by the end. But weight wise, I wasn’t where I wanted to be. I find that like most people, when you go through those winter months, you’re not as active. When I start to put on weight and the numbers start creeping up, I can usually look back and realize my food choices probably weren’t all that great. And I’m probably not working out as I should be- probably not enough of something.

The biggest thing I have to say to people is you have to have variation. If you are doing the same thing, if you’re hitting that treadmill, I don’t care if you were running for 45 minutes and now you’re going to do 60- you have to do something different, you have to mix it up. I think weight training is essential. We all know when you’re doing weight training, you’re causing tears in the muscle and your body knits those back together. That adds to your metabolism. You have to rev that up to burn those calories. Variation is key.

Q: There are a lot of bad guys right now attributed to the weight gain that’s going on in the entire world, like sugar and sitting. What do you think will move the needle for people who are struggling to lose weight? What do you think the real demon is?

Working in pediatrics, I’m in a lot of schools. Childhood obesity is such a huge problem. For a lot of our families, sadly, it’s to a large degree an economic issue. I’ve had families flat out tell me that fast food is so much cheaper. If they can feed their family for 15 bucks, they’re not going to go the store and get organic apples and salad, because their kids are not going to be as full. I think a lot of it is that.

And technology is a wonderful thing but it’s also evil in a lot of ways. With our kids at home, we argue about screen time. Now that they’re a little bit older, they’re busier and it’s easier, but getting your kids outside is important. If you’re a working mom and you’re barely putting food on the table, it’s tougher. It’s hard to make that transition, but it’s important and there are things you can do. You can take the kids out walking. It’s a shift in perspective. But there are a lot of families in America working to put food on the table and so that’s a big battle to fight first.

Q: What drives you to be the best in your work and in your fitness? 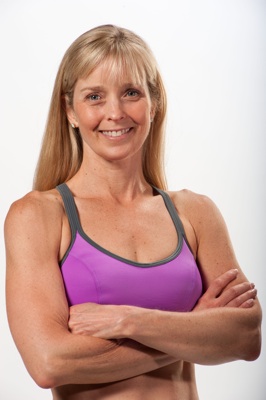 Well, I always want to have taught somebody something for the day. I do a lot of work in Philadelphia. With my pediatric practice I think of the kids I saw that day and hope that I helped at least one kid learn something or do something better. A lot of my kids are pretty involved and their improvement is often in millimeters. At the end of the day, maybe I helped a teacher learn to move a child better, or actually see quality change in the movements of that child. In my classes, maybe I’ve taught somebody how to do a squat better, so that their technique is improved and they’re getting more of their glutes and less of their back.

As a fitness instructor, it’s very easy to just go in and teach the choreography, but I frequently stop my classes. I’ll put the music on pause, tease them and say it’s a PSA, Public Service Announcement. If we’re doing punches, I’ll say: your elbows are in, we’re starting in, we’re not doing a big wide swing. I’ll correct their technique and actually TEACH them something. It’s really rewarding because then you see them get better. In the group I’m teaching water exercise for, I have some older clients. We do 25 meter sprints up and down the pool. Last year my oldest clients- some of them in their 70’s- were making it to the end of the pool in 55 seconds. Just this week, I said we’re cutting that down, and everybody crossed that pool in under 45 seconds. It’s not even the end of the season yet. I love progress.

But as the instructor, you have to put yourself out there, you can’t just go through the motions. It’s a lot of work and everybody’s a critic. Sometimes you walk out of class and someone says “Great class”, and sometimes it’s “Aww, I wanted a little more cardio”. You have to be a little bit tough. But teaching people is absolutely what drives me. I’m never going to ask them to do something that I myself can’t do. If I can’t do those 24 push-ups with you, I’m not going to have you do them. Now, of course, maybe when I’m 60 I’ll have a different opinion, but right now, that’s what I would say.